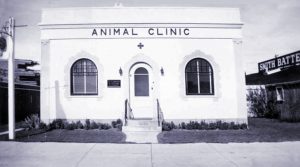 The original owner of the clinic was Dr. J. Gordon Anderson who was born on September 21st, 1900 in Calgary, North West Territories (Alberta didn’t become a province until 1905).

1924 saw the beginning of chuck wagon racing in Calgary and Dr. Anderson became the official veterinarian for the Calgary Exhibition and Stampede. The Calgary Zoo was established in 1929 and he was named “honorary veterinarian” and looked after all the animals present at the zoo. There was one incidence where he had a white polar bear tied up so that he could remove its four back molars without the use of anaesthetic.

On May 12th 1937 Dr. Anderson received a Medal from Buckingham Palace, honouring his veterinary work for the army.  He was President of the Alberta Veterinarian Medical Association for 13 years.

Dr. Anderson started practice in Calgary with Dr. McKay at the clinic located at 6th Avenue and 1st Street SE. It became evident that there was a need for a facility for horses, food producing animals and some small animals for Calgary and the surrounding area so a new clinic was built in 1941 located at 1016 – 9th Avenue SW. Dr. Anderson was the first practitioner and other early practitioners were Drs. Chris H. Bigland, Herb C. Carlson and G.G. Pook. Early staff included Jack Brooks who was the animal handler and Clipper, Mrs. Hewitt who was the receptionist, and Joe who was the night watchman.

In 1960, the practice was split into large and small animal rural practice. Dr. Stanley R. Bell and Dr. William T. Nagge set up the large animal section of the practice at Portland Street SE.

The Alberta Racing Commission was formed in the late 1960’s and Dr. Anderson became the veterinarian in charge of thoroughbreds.

A quote from “One Day’s Journey” by Stephen Wilk

“Dr. J.Gordon Anderson recalls never using a horse and buggy since 1924. From that time on, cars were used for the bulk of travel. Occasionally a vet would have to ride horseback to get to his destination in the pasture. He says that “in all conditions of weather the vet was called upon, and faithfully he journey to the sick animal regardless of distance or season.” As vet were few in the 20’s and 30’s, Dr. Anderson remembers commonly driving the area northeast to Delia, east to Bassano, south to Claresholm, west to Banff and north to Olds. There were no graduate veterinarians in that whole area in 1924 for example. Therefore, most calls were of an urgent nature, including maternity cases for cattle and horses, milk fever in dairy cattle, and all other emergency types of problems with animals.

Methods of cure and medication have greatly changed. Whereas in the early days milk fever was treated by pumping air into the udder of a cow, now quantities of calcium glutamate are injected intravenously. Infectious diseases are treated today by the use of antibiotics. Horses with colic in the early days were the greatest source of high mortality. Treatment required infinite patience on the part of the veterinarians, sometimes necessitating staying up all night with the animal.

The veterinarian traveled all types of road, in every type of condition. One vet had to be pulled out seven times on a muddy road.

The early 1950’s to 1960’s had small animal medicine in its infancy. Laboratory help was limited to C.B.C.’s, urinalysis, BUN titrations and blood glucose measurements.

Canine Distemper was rampant. The first vaccines were of killed virus type. In 1960 live modified check embryo virus vaccines for dogs became available. Stevenson Turner and Boyce had “Boostervac”; Pitman Moore had a modified check embryo live vaccine including a hepatitis fraction called “Tissue Vac D.H.”. Since these vaccines came into regular use, distemper, hepatitis and other viral diseases have become rarely seen.

In the 1950’s the anaesthesia used was ether and chloroform. Numbutal I.V. for long surgeries in dogs. Suritol for short procedures. In the late 1950’s metofane and flurothane.

“All facilities Most Modern”

“Clinic Has Everything for the Care of Pets”

On September 26th, 1964 Dr. J. Gordon Anderson was honoured at a Testimonial Dinner at the Palliser Hotel in Calgary. 55 Alberta veterinarians and their wives gathered to honour Dr. J.G. Anderson’s fortieth year of continuous veterinary practice. Dr. Chris H. Bigland of Saskatoon was the Master of Ceremonies. In his address, Dr. C.H. Bigland traced the history of Dr. J.G. Anderson’s years of practice in Calgary, from the early days of horse practice in 1924 up to the present time. He mentioned Dr. J.G. Anderson’s pioneer activities in bringing to Alberta livestock men, many of the newer developments in veterinary clinical medicine and therapeutics. On behalf of the assembled guests, Dr. E.E. Ballantyne of Edmonton presented Dr. J.G. Anderson with a personal gift of a horse-measuring walking cane. Dr. K.R. Macdonald of Ponoka spoke on behalf of the veterinarians who have been employed as students or graduates in Dr. J.G. Anderson’s practice. Twelve of them were present for the testimonial dinner. Greetings from the Canadian Veterinary Medical Association were expressed by Dr. A.E. Lewis of Calgary; President of the C.V.M.A. Dr. A.E. Lewis mentioned that Dr. J.G. Anderson was one of the early pioneers in the formation of the C.V.M.A. Convention committees in 1951 and 1961, when the conventions were held in Banff, Alberta. Dr. William T. Nagge of Calgary, President of the Alberta Veterinary Medical Association, spoke of Dr. J.G. Anderson’s many years of service to veterinary medicine in Alberta. During his 40 years as a veterinarian Dr. J.G. Anderson has held every executive position in the AVMA and is presently Honorary Vice President. A toast to Mrs. Effie Anderson was proposed by Dr. M. Saville of Wainwright and she was presented with a bouquet of roses by Mrs. H.T. Anderson of Olds. As a gift to Dr. J.G. Anderson, his associates in Alberta established a trust fund, the interest from which will constitute the J. Gordon Anderson Award in Clinical Medicine. This award is to be presented annually to the outstanding student in clinical medicine in the senior year at the Saskatchewan College of Veterinary Medicine. The gift honouring Dr. J.G. Anderson was presented to Dr. D.L.T. Smith, the first Dean of the Saskatchewan College of Veterinary Medicine by Dr. Herb C. Carlson of Edmonton.

Call Us Text Us